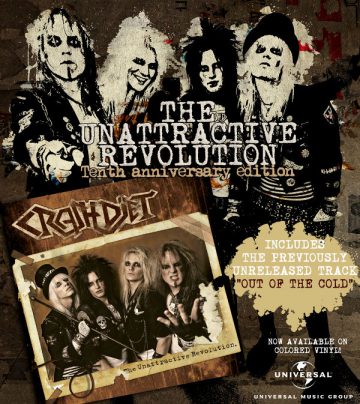 I suppose you haven’t missed any of our recent announcements regarding what’s to come next ;). On a personal note, I don’t know if I’ve ever experienced such a big relief ever – after keeping the whole thing with Gabriel a secret for sometime it truly felt great to share the good news with you all, and the response has simply blown us away, big time. Thank you! We’re back, finally, can hardly believe it myself :).

But! In all this excitement about the future, it’s still worth to take a look back. After all, it was 10 years ago we released The Unattractive Revolution – an album that is loved by many – while at the same time has been kind of overlooked by us through out the years. Probably due to the internal struggles we had, as a band, at the time it was released.

Today I’d say ‘fuck it, get over it and move on’ – it truly is a great album, and we’ve worked together with Universal to make a vinyl release happen. And it just did!

Obviously it’s a little bit different to release a vinyl through the big Universal-machine compared to when you D.I.Y. This is a worldwide release – on colored vinyl – and it will probably be available in your local record store too (if you still have any ;)) – however – ours are pressed on BROWN / BRONZE vinyl and there were only 86 of these made….

To spice things up a little, Martin made a brand new t-shirt design :

For those of you who simply can’t get enough, and want both, there’s also a nice bundle available, where you get both the vinyl and the t-shirt for a reduced price :).

For all the details, start here : https://www.dietrecords.org/crashdiet/tur

Thank you! Stay in touch )

Sleaze Roxx stated the following in its review of The Unattractive Revolution ten years ago: “Probably every reader of this review knows the story of this band. A lot has been said and written about whether it is possible for Crashdïet to continue with a new singer after the death of founder Dave Lepard (R.I.P.). While some people were skeptical if these guys could manage to deliver an album close to the standard of 2005’s glorious Rest In Sleaze without their main songwriter, I was simply happy that they got through the hard times and got on with the band.” Sleaze Roxx went on to conclude: “All in all, this album is a strong statement from the band, that they won’t back down after the terrible loss and will carry on their quest of bringing sleaze back into the charts – which, by the way, they have managed to do in Sweden.”

Crashdïet‘s “In The Raw” video:

Crashdiet’s latest musicvideo for single “In the raw”