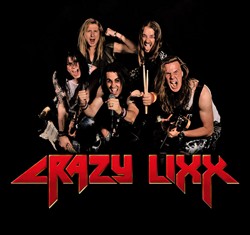 The new Crazy Lixx line-up is now complete and the band has been rehearsing for the upcoming tour during the last month.

Filling, or rather, re-filling the drummer spot is once again Joel Cirera, who took what turned out to be a short break from the band right after the recording of the last album. The completely new addition is instead 21 year old bass player Jens Sjoholm, who will be joining the Lixx on tour during 2012 while still remaining in his metal band Solity.

“We’ve found another great young swedish talent in Jens and the way things are shaping up right now we might very well be looking forward to the best live-sounding Crazy Lixx to date,” says lead singer Danny Rexon.

Crazy Lixx released their third studio album entitled ‘Riot Avenue’ on April 20th in Europe and April 24th in North America. “In a year that is already overflowing with excellent new music Riot Avenue has quickly floated to the top of the heap. If this isn’t album of the year it only means that 2012 is going to be one hell of a year for killer music,” raved SleazeRoxx.com in a review upon its release.

Crazy Lixx released their debut album ‘Loud Minority’ in 2007 — placing the band on the top of the Swedish sleaze rock scene and within the Sleaze Roxx Top 10. In 2010 they partnered with Frontiers and released ‘New Religion’, and almost exactly a decade after vocalist Danny Rexon and ex-guitarist Vic Zino (now in Hardcore Superstar) formed the band, they returned with ‘Riot Avenue’.