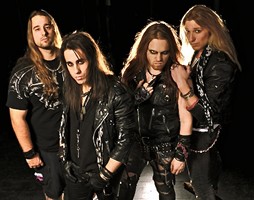 Crazy Lixx are busy in the studio recording their third album that will be entitled ‘Riot Avenue’.

According to singer Danny Rexon, “This time the music is a little more riff-based and straight-forward. We wanted to make real a hard rock album, so we decided to have a little more raw feeling in the production, sound and songwriting compared to our previous albums and there’s a lot more up-tempo songs than we had on New ‘Religion’. Also, the addition of a second guitarrist, Edd Liam, has made it possible to add some twin guitar playing and other interesting musical stuff that we’ve used on the album.”

Some of the song titles are “Whiskey Tango Foxtrot”, “Young Blood”, “Riot Avenue”, “Church of Rock”, “Fire it Up”, “Only the Dead Know” and more. The album is planned for a worldwide release in April 2012 and will be followed by the usual string of live dates around the World.

‘Riot Avenue’ will be the Swedish band’s follow-up to 2010’s critically acclaimed ‘New Religion’. The album is once again being produced and recorded by Chris Laney (Zan Clan, Randy Piper’s Animal) and will be released through Frontiers Records.