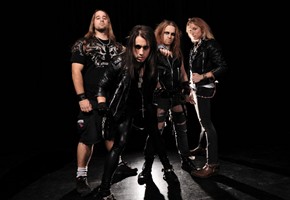 Crazy Lixx Drummer Leaving The Band After A Decade Together

Drummer Joel Cirera will leave Crazy Lixx before the end of 2011, after almost 10 years in the band. In June of last year the Swedish rockers announced the addition of guitarist Edd Myers — who had been playing with the band live since the release of their last album ‘New Religion’ in early 2010 through Frontiers Records.

In an official statement Joel said, “After playing in Crazy Lixx for the last ten years it’s finally time to say goodbye! It’s with mixed feelings of sadness, anger and joy that I’m finally leaving the band that I dedicated almost one third of my life to. I hope the guys in the band can find a suitable replacement for me and I wish them all good luck in the future ’cause I know the new album is going to sound awesome!

I want to thank everyone who has been involved with Crazy Lixx in one way or the other since we first started back in 2002. It’s been a rollercoaster ride since the start with many ups and downs and I will have memories for a lifetime from the whole experience.

I want to thank my family for the support they have given me and my girlfriend for putting up with a LOT of stupid shit during the years but mostly I want to thank the people that listen and support us in one way or another. You guys have made driving for eight hours to play in front of 30 people worthwhile. With the years there were more and more of you guys and you have left a great feeling in my heart that I will cherish for the rest of my life.

I will make three more shows with the band with Barcelona in October being my final farewell! Hope to see you guys these last couple of shows or I’ll see you some other time!”