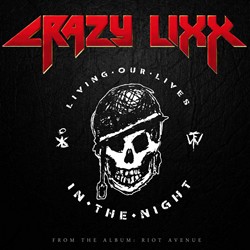 Swedish hard rockers Crazy Lixx today unleashed their new single “In The Night”, which kicks off the release of the band’s new album ‘Riot Avenue’ — due for release on Frontiers Records on April 20th in Europe and April 24th in North America.

Taking inspiration from Guns N’ Roses, early Aerosmith and KISS, Crazy Lixx have created a high-energy rock ‘n’ roll sound and the new single is an amazing example of Crazy Lixx’ full blown rock ‘n’ roll attitude. “In The Night” is currently available through iTunes and is also available as a physical copy, exclusively distributed in Sweden through Sweden Rock Magazine in the issue that will hit the streets this week. This special release will include two exclusive acoustic bonus tracks (unavailable elsewhere) of “Riot Avenue” and “Fire It Up”.

Crazy Lixx debuted in late 2007 when they released their first album ‘Loud Minority’ which placed the band on the top of the Swedish sleaze rock scene and within the Sleaze Roxx Top 10. In 2010 they partnered with Frontiers and released ‘New Religion’, and now almost exact a decade after vocalist Danny Rexon and ex-guitarist Vic Zino (now in Hardcore Superstar) formed the band, they return with a brand new album!