Swedish rockers Crazy Lixx have released a video for their song “Killer” from their live performance at the Bang Your Head Festival in Germany on July 13, 2018. 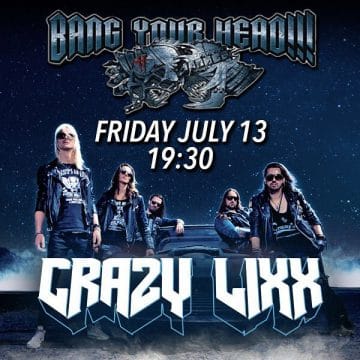 “We know it’s a long wait for some of you guys until you get to see Crazy Lixx live (again?) – So in the mean time, here’s a little something from last year’s tour for ya’ – Fire in the hall! ?

Crazy Lixx‘s next studio album Forever Wild will be released via Frontiers Music Srl on May 17, 2019. The group’s last studio album Ruff Justice finished at #5 on the Sleaze Roxx Readers’ Top 20 Albums of 2017 to which Sleaze Roxx stated:

“Probably the most consistently loved band to be featured on the Sleaze Roxx Readers’ Top 20 Albums year end list has to be Crazy Lixx. Ruff Justice represents the group’s fifth studio album and the fifth to land in the Sleaze Roxx readers’  year-end top six after Loud Minority (#3 in 2007), New Religion (#6 in 2010), Riot Avenue (#4 in 2012) and Crazy Lixx (#4 in 2014). Quite simply, no other band has achieved so much consistency among Sleaze Roxx readers. One almost wonders what will it take to get Crazy Lixx to snatch that #1 spot? Given that Sleaze Roxx is based in Canada with a large percentage of its readers in North America, perhaps having Crazy Lixx come to North America to play some shows would do the trick.

On May 5th, this will become a reality as Crazy Lixx will be playing their first North American gig when they play Day Two of the MelodicRockFest USA. While it’s definitely better late than never — and you can’t blame the band for deciding not to play shows in North America when it didn’t make financial sense — I have to think that had Crazy Lixx toured the USA like their Swedish counterparts Crashdïet have previously done, one of their five studio albums would have likely landed the #1 spot on a Sleaze Roxx readers’ year-end list. Now that Crazy Lixx are finally playing a show in the USA, perhaps this will be the catalyst for more North American tour dates and the push they need to finish #1 with their next studio album.”