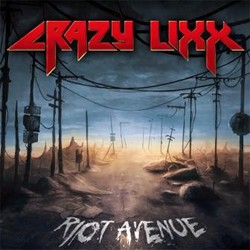 Almost an exact decade after vocalist Danny Rexon and ex-guitarist Vic Zino (now in Hardcore Superstar) started playing together under the name Crazy Lixx, the band is about to release what, without a doubt, is their strongest and most focused album. ‘Riot Avenue’ includes 11 track hard rocking tracks that appeals both to the old fans, as well as a new crowd with its faster tempo and riff-based approach.

“We’ve been trying to make this album heavier than our previous releases and this time it meant doing it ourselves. We haven’t been using an external producer but just listened to what we wanted and what we felt would be the right step to take… and if you ask me, we’ve nailed it. Can’t wait to let people hear our new stuff!” says vocalist and sole remaining founding member Danny Rexon.

At the same time the band is once again decimated down to three members with the recent departure of drummer Joel Cirera and bass player Loke Rivano (both featured on the new album) and the remaining members will look long and hard to replace the rhythm section, before the tour starts in the late spring of 2012.

“This seems to be a curse that Crazy Lixx suffers more often than other bands. When I joined, the band had just lost their guitarist a month after the release of the first album and now even before we started recording this album Joel stated it would be the last album with Crazy Lixx for him and along the way we also lost Loke.” says guitarist Andy Dawson, who joined the band in 2008.

With the addition of another guitarist Edd Liam, Crazy Lixx has also gone for a slightly different style when it comes to the songwriting, especially around the guitar parts and riffs.

“Since there’s two of us now (guitar players), we felt that we could do stuff that wasn’t possible on the previous albums, especially if we wanted to be able to perform the songs the same way live. This time we’ve added a lot more twin guitar work and also thought more about how the songs on the album would transfer to the stage in the best way possible.” says guitar player and newest member Edd Liam.

Crazy Lixx were among the first bands to emerge in what has been known as “The New Wave of Swedish Sleaze” along with Crashdiet, Hardcore Superstar, Babylon Bombs and Vains of Jenna but just like their fellow genre-mates, Crazy Lixx have now created their own style and with ‘Riot Avenue’ they are now ready to show it to the world!

The first single “In The Night” will be exclusively distributed in Sweden through Sweden Rock Magazine in the issue that will hit the streets on March 19th. This special release will include two exclusive acoustic bonus tracks (unavailable elsewhere) — “Riot Avenue” and “Fire It Up”. Digital release will happen worldwide on the same date, but without the bonus acoustic tracks.