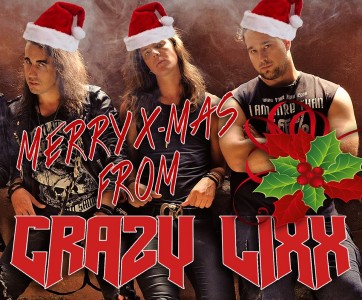 Back in early August 2015, Crazy Lixx made the surprise announcement that both of their guitarists — Edd Liam and Andy Zäta — were leaving the sleaze rock group. After some debating on whether to continue or not, Crazy Lixx elected to start the search for two new guitarists. A little over two months ago, Crazy Lixx provided some good news in that the remaining three members of the band — singer Danny Rexon, drummer Joél Cirera and bassist Jens Sjöholm — were rehearsing with two new guitarists and were hoping to unveil their new line-up before the end of the year.

True to their word, Crazy Lixx will be unveiling their new band members at a show at Arena 305 in Malmö, Sweden on December 28, 2015, where a new video will be filmed.

In anticipation of the unveiling of their two new band members and upcoming gig, Crazy Lixx have just released a snippet of an unplugged performance that the band did at the Hard Rock Hell Festival in Wales, England in March, 2015.