Italian rockers Cream Pie have released a video for their song “Friendzoned!”

“Cream Pie hooked up in 2005 in the south of Italy playin’ a hard rock, sleaze rock, street metal genre the way bands such as Guns N’ Roses, Motley Crue, Skid Row & L.A. Guns used to hit the charts back in the days with a new fresh modern rock sound & brought the dangerous rock ‘n’ roll back to the people! 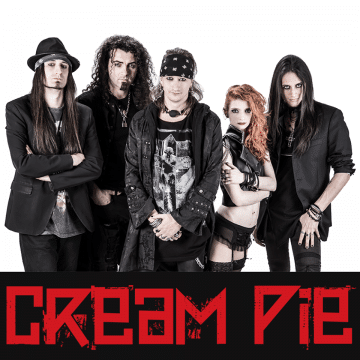 At the end of 2011, the band moved in Milan, Italy. Meanwhile, the band kept on tourin’ and had the chance to share the stage with the legendary Vain and L.A. Guns.

In the spring of 2013, they released their first music video “Tiger” from the album “Unsigned 2.0” getting an impressive of almost 50,000 views on YouTube in the first month only.

In the beginning of 2015, Cream Pie signed a 2-year record deal with the Californian label Demon Doll Records (Vains of Jenna, Tuff, Alleycat Scratch, Shameless, Cats In Boots, Jetboy, Confess…) for the release of the CD “10 Years of Cream Pie 2005 – 2015” featuring a brand new song called “Fall To Rise Again”.

At the end of February 2015, the band released a new music video “No Love Remains”, the second single from the album “Unsigned 2.0”.

In the second half of 2015, they started working on the material for the new album and in December they got to play with Towers of London.

In May 2016, they took part at the “Sleazy R-Evolution over Germany” for 5 gigs where they released the new single “Downtown Pirates”.

In the summer of 2016, they played again with L.A. Guns and also with Great White and W.A.S.P. mean man Chris Holmes.

In February 2017, Cream Pie released the brand new video “Downtown Pirates” and on March 11th, the new album “No Secrets“.

On April 2017, the band was touring Europe for the 4th time for their “No Secrets European Tour 2017” which saw Cream Pie also sharing the stage with the American band Enuff Z’Nuff.”