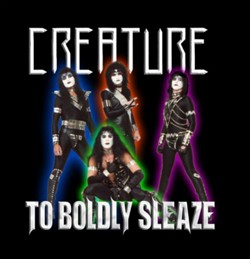 It may be said that these days Gene Simmons is the brains behind KISS, but that wasn’t necessarily the case in the early days. Famed manager Bill Aucoin successfully guided a fledgling KISS to superstar status.

However within a decade, KISS and Aucoin would part ways due to creative differences when KISS decided to take off the make-up. But Aucoin wasn’t done exploring the make-up and crazy costumes. Enter the band Creature in 1986, and Aucoin found himself using the same blueprint that led to KISS obtaining success and fame beyond anyone’s dreams. He guided Creatures career carefully, just as he had previously with KISS. He planned their every stage move and their wild stage show. Honestly, Creature was every bit the theatrical stage performance that KISS was. From the band literally blowing a whole in the roof of Gazzarri’s night club with a confetti cannon to have the oversized Sleaze-O-Matic machine on stage in which a pure, virginal school girl stepped into the machine where the dial was cranked to ten, and a rock-n-roll slutty metal chick stepped out, every show was a spectacle.

FnA Records is set to release ‘To Boldly Sleaze’, a 15 track party in a package with a band that was clearly being groomed to be the next big thing in theatrical rock. All the tracks have been fully remastered and many of the tracks have never even seen the light of day until now. This is definitely one of those uncovered gems that you have to hear to believe. To order the CD visit www.fnarecords.net.

Watch your local west coast rags, as Creature may just don the make-up and costumes one more time for a special upcoming surprise show.