Melodic rockers Creye have announced some key changes in their line-up with new lead vocalist August Rauer and keyboardist Joel Selsfors, which comes a few weeks after the release of their self-titled album.

The following message was posted in part on Creye‘s Facebook page earlier today: 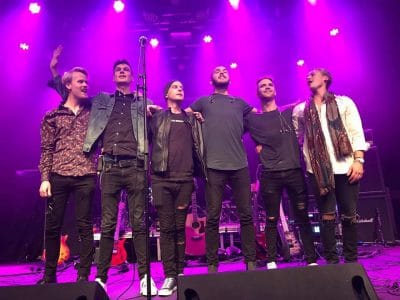 “As some of you may have noticed, we have had some new, talented people on stage with us for these past few gigs. Well, now it is time to shed some light on what’s going on for you guys.

We are very happy to announce that August Rauer is our new lead vocalist! August has excelled on and off stage with us, both in Stockholm and Nottingham. To have a singer with the qualities that August possesses as a permanent member of the band is an honor, to say the least.

Our new keyboard player is the virtuoso Joel Selsfors. Joel made his debut on stage with Creye in Malmö this past summer. Joel is an extremely talented musician in more genres than we can count and we are so happy to have him as a full-time member of Creye.

We are, of course, very sad to see Robin Jidhed and Joel Rönning depart. Their decisions to leave the band were made due to personal reasons, independent from one another. We have known about their decision to leave for a little bit of time now, but we did not want to make an official statement until everything was completely sorted and the future was crystal clear. We want to thank Robin and Joel from the bottom of our hearts for their time in Creye and there are absolutely no hard feelings between us and them.

Last, but certainly not least, we want to thank YOU – the fans. We’ve been having the time of our lives in Malmö, Stockholm, and Nottingham thanks to you. Without your support, nothing would be possible! Creye is going forward stronger than ever, and we are so happy that you’re all with us on this journey….straight to the top!”

Subscribe To Be Alerted When We Add New Videos – http://radi.al/SubscribeFrontiers | From the album CREYE. Get your copy NOW: http://radi.al/CreyeFollow the …