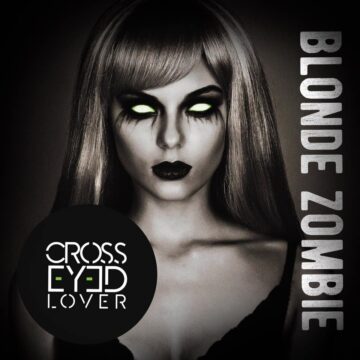 Speaking exclusively to Sleaze Roxx, Rigoli was asked what led to Cross Eyed Lover  to which he replied: “Sal Truscello and myself are friends and ex-bandmates. I suggested that we should revisit some tunes we had been jamming on a few years prior and writing some new material with a view to bringing in another songwriter to pen some lyrics and singing. Sal and I got together and put some basic song structures together over about 12 months. Sal met Andy and Simon through another musical project and asked Andy if he’d be interested in listening to the demos. Andy liked what he heard and put some lyrics down for the music that ended up being the title track for the album Blonde Zombie. Andy proceeded to write the lyrics and provided vocals for all the songs with Simon rounding off the four piece on bass guitar as we headed in to the studio to record the album.”

In terms of how the band name Cross Eyed Lover came to be, Rigoli indicated: “Sal and I have some friends that were in a band during our teenage years and Cross Eyed Lover was the title of one of their songs. We liked the song and the title and we have a connection to it as it was written by our close friends so we decided it would be a cool name for our band.”

When asked what the rock n’ roll scene is like in Perth, Australia, Rigoli responded: “People from Perth love their rock music and are proud of its rock heritage. It is the place where the Farris brothers cut their teeth on the live music scene before forming INXS, where the rhythm section for the Baby Animals began their career and it is the city where Bon Scott was raised and is now laid to rest. It continues to have a really vibrant live music scene that has propelled local bands like Tame Impala and Karnivool to the international stage. Although the last couple of years have been tough on the account of the pandemic, there are still plenty of bars and theaters hosting live rock acts every weekend.”

Cross Eyed Lover‘s “Whatcha Gonna Do About It” lyric video: