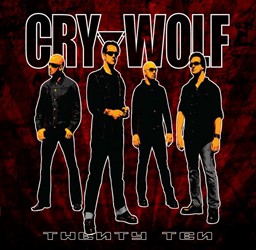 Cry Wolf have just dropped ‘Twenty Ten’, the band’s first studio release since 1990’s ‘Crunch’! The 14 song album was produced by Bob Daspit (Sammy Hagar, Sixth Sense film and Futurama TV show) and its slammin!!! New tunes are up on the band’s Myspace page at www.myspace.com/crywolftheband.

After a successful release party on May 22 in Southern California, the band are ready to take on the rest of the world!

‘Twenty Ten’ is available for download at www.digstation.com and is currently NUMBER 5 in the TOP TEN SELLERS on the site! Cry Wolf thanks all who have bought the album. For those who haven’t, Cry Wolf is a featured artist! Support independent music. You can taste-test the tunes and download away!