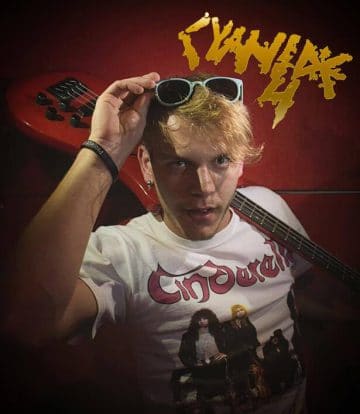 Cyanide 4 are pleased to announce the new forth member of the band!!!

The 4-string bass possibly engraved by the Freddy Krueger hand is the gun of our new bassist and his name??!

We are very happy having the skills & music influences of him under the name of Cyanide 4! 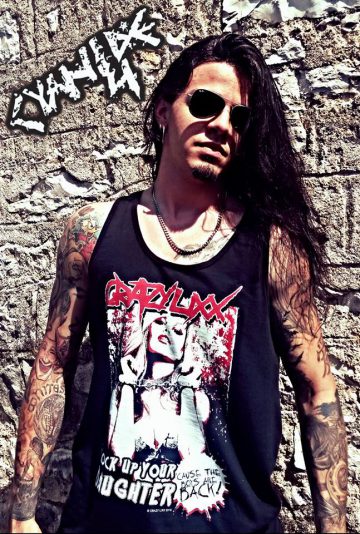 Back on October 1, 2018, Cyanide 4 announced their new drummer Adrian Kyprianos via the following Facebook message (with slight edits):

Several bass & drums auditions have taken place during of seeking new members, meeting unique & talented musicians through the auditions and we would like to thank all of them. It was really honor of us! \m/

BUT NOW! We are pleased to announce you that our NEW GROOVY POWER LEADER of CYANIDE 4 DRUMS is Sir Adrian Kyprianos!!!

Created in 2008, Cyanide 4 quickly built a strong fanbase in Greece and abroad, which longs for the 80s glam era of Los Angeles and looks admirably to the new rock ‘n’ roll wave of the Scandinavian peninsula. Adding their own personal element, Sinn, Slut, Nasty and Alex know their stuff and are making their way step by step towards the music pantheon where endless nights, drinks, rage and love are no obstacles.

Having already completed their first video for their new song “Live The Life”, participating in the compilation “Reborn In Sleaze: A Tribute To Dave Lepard” by Street Symphonies Records, showcasing their talent on the Radio Arvyla TV show and performing as the opening act of Lizzy Borden, Scorpions (in Xanthi and Thessaloniki), Crashdiet and W.A.S.P., they are labelled as one of the most promising sleaze bands of Greece.

Now they are just signed with Perris Records, and the first full length album with the title “Everyday Is A Masquerade” will be released in May 29/2012.Their second coming with the title Nekyia is gonna be released on February 2017 stay tuned for more news!”