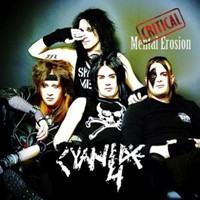 Make sure to get your hands on this very impressive 5 song debut EP! Drawing from their influences of Motley Crue, Ratt and Crashdiet, Cyanide 4 weave glam, sleaze and metal into a ferocious combination. This record will infect your brain and have you spinning it more than you could imagine!

The boys push the music to the maximum with killer looks, great songs, vocals and musicianship, as they blow the doors off the hinges with such rockers as “Temptation Failed”, “Innocent Alibi” and the brand new single “F.F.L.”

The glam and sleaze scene receives another breath of fresh air as Cyanide 4 brings some serious moxy to the table. We see a big future for the boys, so jump on board for the ride, as the party has just begun!

Get your copy today, and listen to audio samples, at http://demondollrecords.com/Cyanide_4_-_Critical_Mental_Erosion.html