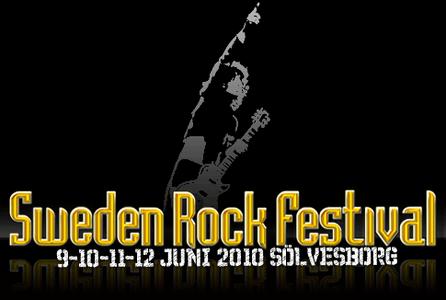 Another four bands have now been confirmed to next year’s Sweden Rock Festival. 10 out of a total of around 60 bands are now confirmed.

Its been way too long, but finally RICK SPRINGFIELD will come to Sweden and of course to Sweden Rock Festival.

He has had a long career as an actor, but it is with his music he really hit the big time, especially in the 80’s when he released classic albums like “Working Class Dog”, “Living In Oz” and “Rock Of Life”. With last years “comeback” album “Venus In Overdrive”, which broke the Billboard top 30, he showed his class as a song writer once again and live it’s heavier and better than you can ever imagine.

We are also happy to announce the return to the festival of one of Swedens biggest metal bands, SABATON.

With a brand new album coming out this spring they will come to Sweden Rock to deliver the biggest and baddest stage show they have ever made. Those who are into melodic metal simply cannot miss this!

From Denmark comes one of the bands we get the most wishes for: D-A-D. As usual, they will give the audience heavy rock with a very characteristic sound influenced by both country and punk, and classic songs like “Sleeping My Day Away”, “Bad Craziness” and “Laugh ‘n a 1/2”.

Last but not least ANVIL, a classic canadian heavy metal band that will do their second gig at the festival and this time they are riding high on the waves of the highly acclaimed documentary “The Story Of Anvil”. A movie that show how this band has been fighting tooth and nail from the 80’s untill now without ever really catching a break. After this film though, the world finally seems to be ready for them and Anvil is bigger than ever!

Sweden Rock Festival is held in Solvesborg in southern Sweden on June 9-12 2010. Tickets are on sale on our homepage: www.swedenrock.com.

Out of a total of around 60 bands on the main stages, the following have been announced so far:

More bands to be announced soon!