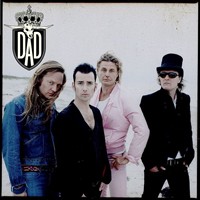 A release date and title for the upcoming D-A-D album has yet to be revealed, but the first single is now streaming online. The song, entitled “I Want What She’s Got”, can be heard in its entirety at dic-nii-lan-daf-terd-ark.dk and the lyrics have been posted at www.d-a-d.dk/lyrics/iwantwhatshesgot/.

The upcoming album will be D-A-D’s first since 2008’s ‘Monster Philosphy’.

D-A-D began playing together in the early 1980s in Copenhagen, Denmark, under their original band name Disneyland After Dark. When the group made their international breakthrough in 1989, they had to change the band name to D.A.D. to avoid an impending lawsuit from the Walt Disney Company.

D-A-D released their first EP in 1985 and have now been together for more than twenty-five years, with only one change in the lineup, as Laust Sonne replaced former drummer Peter Lundholm Jensen in 1999. D-A-D’s 10th album ‘Monster Philosophy’ was released in Denmark in November 2008. In 2009 D-A-D celebrated 25 years of rock, by releasing their complete works in a box, ‘The Overmuch Box’. D-A-D are currently working on a new album, with expected release in 2011.