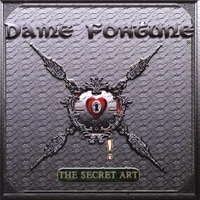 DAME FORTUNE take their brand of “Classic hard rock with a modern Gothic edge” to a new level with “The Secret Art.” If Alan Moore, Neil Gaiman, and Frank Miller were the lyricists for Kiss, Motley Crue and Guns N’ Roses, you’d have Dame Fortune. Both sinister and romantic, DAME FORTUNE uses classic hard rock with occasional Gothic overtones to deliver their clever and biting lyrics. January 31st 2009 LA cult rockers DAME FORTUNE will release their third CD, THE SECRET ART and film their first live DVD at Club Vodka at The Knitting Factory in Hollywood as they continue to build their fan base that already includes more than 5000 fans on myspace through a series of blisteringlive shows. THE SECRET ART finds the Hollywood based hard rock band further expanding their sound and lyrical themes. Standout tracks include the impossibly catchy “Perpetual Emotion Machine,” (Co-written with Richard Davis, Eagles co-producer & member of the Eagles’ touring band), the sleazy metal swagger of “In Like Flynn,” and the arenarock anthem, “Hikikomori (Live As Though The Day Were Here),”encouraging disenfranchised Japanese youth to stand up against their society’s strict code of conformity.

If you thought that the poets of the grunge era merely muddied their waters that they appear to be deep, if you find the pho-rage of numetal and rap rock leaving you cold, if you loved the best of the darker side of the 80’s hard rock like Motley Crue, Guns ‘n Roses, and legends like Kiss, Aerosmith, Queen, and Zep, still send a shiver up your spine, ifyou like big hooks, slamming power chords, catchy melodies, sing along anthems, with lyrics full of sneering rock androll attitude and great storytelling, then DAME FORTUNE is your band. As songwriters they have the musical muscle andlyrical depth to create a new legion of Generation X and Y true believers who can proudly call themselves Rock and Rollers. 2002’s debut EP THE GREAT COSMIC SCEHME earned them the Rock City News Award for Best AlternativeBand. 2004’s BOTHS SIDES OF MIDNIGHT, featuring KISS ghost drummer Kevin Valentine on 5 tracks secured them a distribution deal with Nightmare Distribution and Perris records and was given 3 and 1/2 stars by Japan’s Burrn! Magazine. In 2005 DAME FORTUNE debuted a half dozen new songs at shows both in Hollywood and areas surroundingLos Angeles, each followed by one of their infamous all night after parties, and filmed their first video for “The Loony Bin.” In 2006 DAME FORTUNE ‘s full-length documentary “The Making of Both Sides of Midnight” screened on the historic 20th Century Fox Lot, and they started recording for their most ambitious effort yet, THE SECRET ART. On January 31st, 2009, after 4 years of blood, sweat and tears, the secret will be revealed…