UK rockers Damn Dice‘s guitarist Wallis was recently interviewed by The New Wave of Hair Metal‘s senior admin Tom and the former spoke about the status of the group’s upcoming new studio album. 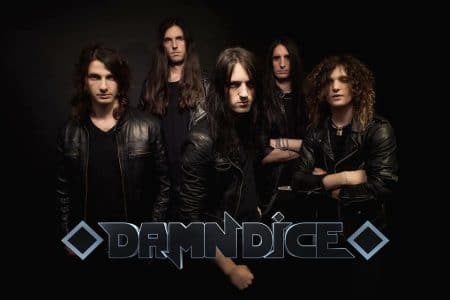 In terms of how the recording is going, Wallis stated: “Recording is going well so far, we’re enjoying recording at ours without having any time or financial pressure! We’re not rushing ourselves either and that makes a difference to us. Less stress and more fun!”

Wallis was asked how many songs were 100% completed to which he replied (with slight edit): “100% completed? None so far! All the songs are written and recorded as demo versions though but it still is the early stages of the recording, and none of the songs are ready to be burn onto a CD. So far drums and bass guitars are recorded, and me and Diego will start recording guitars within the next week. Then, it will be Alex‘s turn with the vocals, then backing vocals all together, and last mixing and mastering.”

With respect to when the new Damn Dice album will be available to the public, Wallis advised: “Around November this year, it’s far ahead but we want to take our time to do everything right, record the album in the best conditions, make it sounds great, and prepare its release properly. Not to worry though, there will be a lot of content, vlogs, updates, sneak peak and singles to chew on while waiting.”

You can read the rest of the interview with Wallis at The New Wave of Hair Metal’s Facebook page.

DAMN DICE playing “No Fear” in 360° video!Get yourself a front-row seat at this live-recorded high-octane performance.To make sure you don’t miss our future …