The London, U.K. based rockers Damn Dice have just released their debut album, The Great Unknown, which features twelve tracks. The band has already released two video for the songs “What Now?” and “Driven” in support of the new record.

Damn Dice have recently announced the addition of a fifth permanent member to the band by the name of Diego who will be handling rhythm guitar duties. Diego joins band members, Alex (lead vocals), Wallis (lead guitar), Marco (bass) and Fransoa (drums) who round out the band’s line-up.

Back in October 2013, Damn Dice released the EP Wild ‘N’ Ready. Sleaze Roxx stated the following in its review of the band’s EP: “The one thing I have to say is that Damn Dice do not sound like anyone out there — they have their own sound and style. They’ve been part of the London sleaze scene and definitely show no signs of stopping. Wild ‘N’ Ready is an incredible EP, and anyone who says ’80s influenced hard rock music is dead must hear Damn Dice.”

Sleaze Roxx interviewed Damn Dice‘s lead guitarist Wallis back in October 2013 who stated the following when asked what he loves about music: “It means everything to me, and I’m very lucky to live this passion with my brother, Marco and Alex. I love the fact that music follows me everywhere all day and all night long, it’s like a drug — I need to hear melodies, instruments, vocals. I love the fact that sometimes I listen to the same song all day (laughs) or that I shiver when I watch live gigs. As a songwriter, I love creating music, improvising, and singing stuff — I need it, that’s how I express myself! I remember when we listened to the final version of the EP for the first time, we were euphoric as hell. The same thing happens each time we finish writing a song. Playing live is an amazing moment, it’s so intense and the amount of adrenaline we receive is so powerful and addictive.” 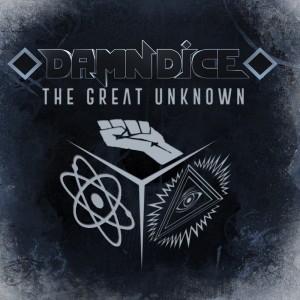 DAMN DICE – ‘Driven’ Music VideoSingle from debut album “The Great Unknown”. Listen to it on Spotify: http://smarturl.it/DDalbumSpotifyGet it now! http://sto…