Canadian rockers Damn Pigeon have released a video for their song “Starlight” from their new album Whisky Sinners, which was released earlier this year on May 1, 2016. 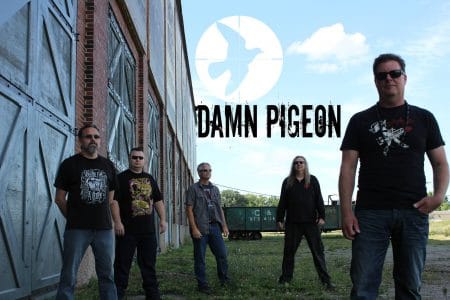 Sleaze Roxx stated the following in its review of Damn Pigeon‘s Whisky Sinners: “Damn Pigeon are one of those bands you can’t believe you’ve just discovered. Hailing from a little town just outside London, Ontario in Canada, they formed in or about 2009 and released their first studio album (and wonderfully titled) Dismal Reviews. Unfortunately, founding member and singer Steve Phillips died shortly after recording the album, so there was no touring or support to follow. After several months off, and auditioning new singers, Damn Pigeon welcomed former Syre singer Doug Weir into the mix.” Sleaze Roxx went on to comment: “I think I will use many comparisons to other bands in this review. That’s not to say the music is derivative by any means, but simply a way for me to describe what I’m hearing stylistically. For example, the lead off track “Starlight” is flat out Skid Row, until the bridge, which has great vocal harmonies and a very good guitar line.”