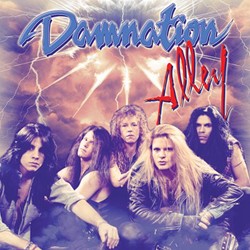 Demon Doll Records in conjunction with the hair metal machine Damnation Alley have cracked open the vaults to bring you some serious ass kickin, high heel wearing, Sunset Strip stompin Rock ‘N’ Roll. These guys had it all working, from their hooks, looks, singer Lance Haunrogue, to the double axe attack of John E. Katz and David Leigh — these guys crank up the heat as well as the volume.

Finally the 9 song ‘Damnation Alley’ CD is available. Full of all the studio cut anthems such as “Psycho City”, “Sticky Situation”, “Seduction Sister”, and “I’ve Got TO Be Free”, Demon Doll Records have also managed to get their hands on a professionally recorded live show of the band including the never before heard songs, “Down ‘N’ Dirty”, “Sex Machine”, and “Fake Integrity”. The ferocity is endless as well as timeless.

Formed in the hair metal heyday of 1990, Damnation Alley had the chops to hang with the best of them. Supporting such great acts as Faster Pussycat, Atomic Playboys and Bang Tango, as well as sharing the Sunset Strip stage with fellow Demon Doll artists Swingin’ Thing, Blackboard Jungle and Alleycat Scratch to name a few. Damnation Alley could hold their own and then some. This is a great listen and one to surely rattle the walls if cranked up properly. We highly recommend this band and feel as though they did not get the credit they deserved for truly hitting the hair metal hammer on the head.

‘Damnation Alley’ is being offered at a special introductory price of $8.99 for the first two weeks of release. To order and listen to sound samples visit demondollrecords.com/damnation_alley.