Black Star Riders guitarist Damon Johnson has started a PledgeMusic campaign to raise funds for the release of his new upcoming solo album Memoirs Of An Uprising. 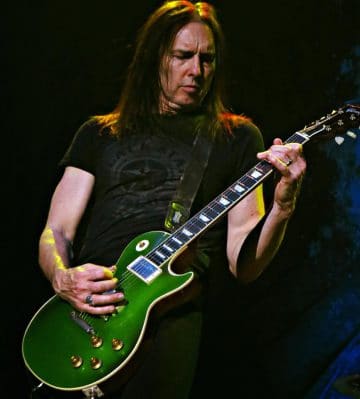 Damon here, coming to you with much gratitude, excitement and information about my upcoming solo album, ‘Memoirs Of An Uprising’.

And I will be working for the first time as a solo artist with PledgeMusic.

The recording of these 10 brand new “Damon songs” is almost complete. I’ve got a few more overdubs to do, and then straight into getting it mixed, mastered and packaged.

But this album is extra special for me because for the first time ever I’m going to release a solo album on VINYL, as well as CD. And through this PledgeMusic campaign there will be lots of super exclusive items available only to YOU, and loads of unique content from home, the studio, and the road.

The fact that I’m getting to make this album at all is purely down to the support and love you all have shown for my music over the past three decades. And as I discussed this fact with PledgeMusic, they have encouraged me to “un-earth” and make available one-of-a-kind items during this campaign…things like bundles of exclusive photos and memorabilia from all my various band endeavors; my small Peavy practice amp that I’ve written songs on ever since Brother Cane’s ‘Seeds’ album; a “still-in-the-shrink-wrap” copy of my long time out-of-print ‘Dust’ CD; even autographed guitars…and much more.

Again, this is the first time for me to work with PledgeMusic as a solo artist. And the catalyst is absolutely this new music I’ve created. The songs are inspired and my band (Tony, Jarred & Tony) played and sound amazing as always. And I feel these songs deserve as much exposure as possible, even in this day and age where the business of making and distributing music has change dramatically.

I’m asking for your help. I need your help! I’m at LEAST asking you to check it out what we’re offering through this PledgeMusic campaign.

So come back to this page often as some archival items will be added regularly. Now, please go tell your friends who might not be in the flow of traffic to check it all out, too!

Thank you for giving me this life in music. I’m so proud of this next album. Together, we’re gonna give it the eyes and ears that it deserves. You guys are the best…

Sleaze Roxx stated the following in its review of Johnson‘s live album Birmingham Tonight: “Listening to an album, a live one especially isn’t just about the music. It’s where you were, who you were with when you first heard those songs. I found it very important when writing the intro to this review that I give you, the reader an idea of what this artist means to me. I could basically just say, well this song was good; I like that guitar part etc. — which I did, but I also gave a history of the short, sporadic meetings with Damon Johnson and how it also pertained to my life. My hope is this review will get to Mr. Johnson because as Thin Lizzy has influenced him, Damon Johnson has done the same for me.  For that, I am very grateful.”