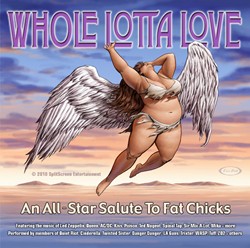 For the occasion, the organizers adopted ‘Whole Lotta Love’ as the theme of the event, showcasing its music and artists throughout their weekend programming. Highlights included the ‘Whole Lotta Love’ cast photo shoot, a meet & greet autograph session, fan photo ops with an oversized reproduction of the cover art and the Saturday evening semi-formal dance (for which attendees were encouraged to come dressed as their favorite rock icons). All photos can be viewed at the official “Whole Lotta Love” MySpace page — www.myspace.com/WholeLottaLoveTribute/photos.

Additionally, the SplitScreen Entertainment website has been updated with the latest news and reviews from the ongoing ‘Whole Lotta Love’ rollout. Among the updates are links to its online media coverage at such outlets as Sleazeroxx.com, iVillage, Salon.com and Jezebel.com. Also added are new interviews with the album’s participants, including Eddie Ojeda of Twisted Sister, Stevie Rachelle of Tuff and Pete Evick of the Bret Michaels Band. Photos of the contributors showing off their copies of the album are also now featured, including L.A. Guns singer Phil Lewis, Twisted Sister guitarist Jay Jay French, longtime W.A.S.P. drummer Stet Howland and blues icon Candye Kane. Included as well are recent photos of ‘Whole Lotta Love’ executive producer A.J. Confessore alongside some of his own rock & roll heroes, including founding Kiss members Peter Criss and Ace Frehley. All updates can be found at the SplitScreen Entertainment website — www.SplitScreenEntertainment.com.

As previously reported, ‘Whole Lotta Love: An All-Star Salute To Fat Chicks’ is a musical homage to the big, beautiful women who make the rockin’ world go ’round. It features all-new recordings of popular songs praising the fuller female figure, originally made famous by some of the biggest names in rock and pop music. These anthems to abundance are performed by renowned rock & rollers from yesterday and today, along with a select few rising stars. In direct opposition to the “no fat chicks” mantra espoused by some, ‘Whole Lotta Love’ is a star-studded celebration of large and lovely ladies.