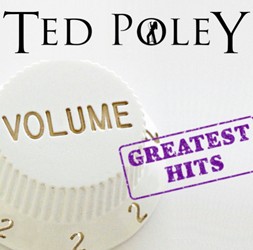 Danger Danger frontman Ted Poley has released his second ‘Greatest Hits’ collection, a two disc set that is being sold exlusively on eBay.com.

The follow-up to 2009’s ‘Greatest Hits Vol. 1’, originally released as ‘Greatestits’, is limited to 2000 copies and features re-masters of some of Poley’s favorite songs that didnt make it onto ‘Vol. 1’ plus four new tracks not available on any of Poley’s CD’s until now.

This collection of 17 classic Ted Poley songs is a must have for collectors of ‘Greatest Hits Vol. 1’, which is almost completely sold out.

‘Greatest Hits Vol. 2’ will not be available anywhere else, including iTunes or other digital sites, and no retailers will carry the album. The only place the get the new collection, other than at one of Poley’s live solo shows, is through eBay.com

Since you will be buying this directly from Ted Poley, he will be happy to autograph it for you on request and he will be also donating a small portion of any profits from this CD to local Animal Shelters.

‘Greatest Hits Vol. 2’ will begin shipping in about 10 days, as they will take time to autograph and package. Please remember to add a note with your PayPal payments letting Poley know the name to autograph on the CD. If no note is received with a name the disc will remain sealed.