Danger Danger axeman Rob Marcello will be playing and touring with The Poodles presumably in 2018.

The following message was posted on The Poodles‘ Facebook page back on January 2, 2018: 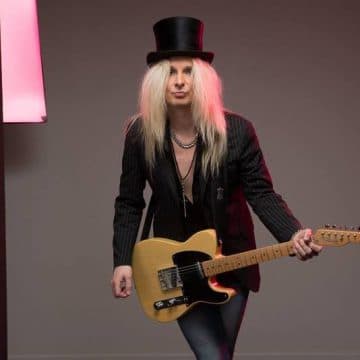 “The winding road takes us to different places and for Henrik the road leads back into the Mexican rain forest in the coming year.

For this reason, during this time Rob Marcello (Danger, Danger) has taken service as gunslinger in The Poodles and will be touring with the band in Sweden, Europe, and Japan. We welcome Rob on board and wish Henrik the best of luck on his travels!

Although Marcello is still listed as the guitarist for Danger Danger, Trixter guitarist Steve Brown has been playing in the band since 2016 including at the Monsters Of Rock Cruise in February 2017 and the Hair Metal Heaven Festival in August 2017. Brown reportedly started playing with Danger Danger due to Marcello’s US visa issues.

Back in early February 2017, Ruben Mosqueda interviewed Brown for Sleaze Roxx and noted that the guitarist had played with Danger Danger at the Monsters Of Rock Cruise. Brown stated: “I did. In fact, I played a couple of gigs with them last year. Let’s just say that I will probably wind up doing a lot more with them in the future.” In terms of whether Brown was going to be a permanent member of the band, the guitarist advised: “[Pauses] Well, we’ll see how it goes but they know I’m willing to do it. I love that band and Bruno [Ravel], Steve [West] and Ted [Poley] are like brothers to me.”

The Poodles‘ “It’s No Good” video: