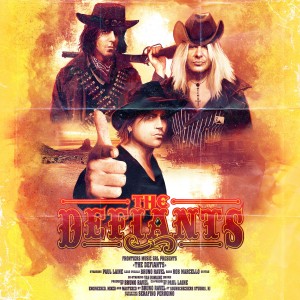 “The Defiants is a new band put together by Paul Laine, Bruno Ravel and Rob Marcello. Three fabulous musicians, all with ties to the great hard rock band Danger Danger.

Best known for being Danger Danger‘s frontman for a 12 year stint from 1992-2004, which included four studio albums, Paul Laine is now coming back to work with his former bandmates Bruno Ravel and Rob Marcello, who are the other two pillars of The Defiants.

The guys got back together under suggestion of Frontiers’ President, Serafino Perugino, who really wanted to offer the fans a chance to hear some new music from these guys. The resulting album is an extremely exciting affair which is going to please not only D2 fans, but also all the ones who are into the classic sound from the glory days of rock in the ’80s and ’90s.

Paul Laine says “From the moment Bruno and I started writing together,we knew we had something special. It’s been my experience that when the writing process is effortless, you’ve trapped lightning in a bottle…within the first 2 1/2 months, we had close to 40 ideas up on the board. I think it surprised both of us how intuitive we were of each others ideas. I’m very proud of this record, and it feels good to let loose on an album of complete stadium rockers. Rob Marcello, I consider to be one of the biggest talents in the world of modern guitar players. I love how much he shines on this record, and from track to track, I couldn’t wait to hear what he had to say musically. On a personal note, it feels good to hit another musical and writing milestone with this album. It was very hard to choose the material for this record,and its exciting to know that there are still bullets left in the chamber that nobody has heard yet…”

Bruno Ravel adds “I’m so stoked for you all to hear this record! It was so much fun to create, and that feeling will be very 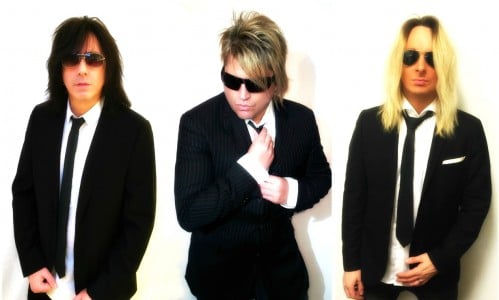 evident once you give it a listen. Paul and Rob poured every bit of themselves into these tracks, and their performances were just ridiculous! Add that to the aggressive killer drum pounding that only my good buddy, Van Romaine could deliver, and you have what equals a bonafide rock ‘n’ roll roller coaster! Strap yourselves in folks! And get ready for the ride!”

The Defiants are set to appear live at the Frontiers Rock Festival in Trezzo (Milano), Italy on April 24, 2016, where the band will perform classic tracks from Paul Laine‘s solo career, some Danger Danger hits (of course) and songs off The Defiants‘ debut!”

The Defiants’ track listing includes:
Intro (For A Few Dollars More – Carillon’s Theme)
Love And Bullets
When The Lights Go Down
Waiting On A Heartbreak
Runaway
Lil’ Miss Rock’n’roll
Last Kiss
Save Me Tonight
Take Me Back
We All Fall
That’s When I’ll Stop Loving You
Underneath The Stars

Having a blast recording the new album! Look for a release early spring 2016.Gear used:GJ2 “Glendora” with Grover Jackson “Habanero” pickups,Hughes And Kettn…