The Defiants, which already featured current Danger Danger bassist Bruno Ravel and guitarist Rob Marcello along with ex-Danger Danger lead vocalist Paul Laine have now recruited Danger Danger‘s long-time drummer Steve West to play drums on the group’s sophomore album. According to Wikipedia, Ravel, Marcello, Laine and West played together as Danger Danger back in 2003 and 2004. 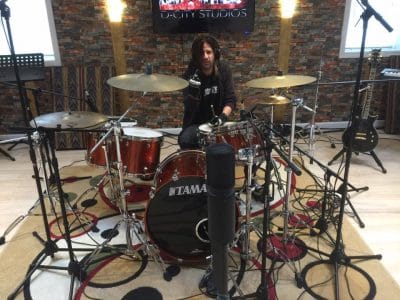 The following message was posted on The Defiants‘ Facebook page earlier yesterday:

“Laaaaadies and gents… you ain’t seen nuthin’ yet!

Bashing the drums on the new Defiants record… The one, the only, #SteveWest!! Setting up, getting sounds…Drums tracks will be done in a few days. We’re pumped!! DCity Studios Paul Laine Rob Marcello#hrsoli Danger Danger #Zokusho Frontiers Music srl #BrunoRavel“