Greek melodic rockers DangerAngel have released a fifth video in support of their album All The King’s Horses, which was released via MelodicRock Records on September 30, 2016. This time, it is DangerAngel‘s song “Devil’s Waltz” that gets the video treatment. The video was filmed and directed by Chris Tsoukalas, and filmed by Orfeas Kalafatis. 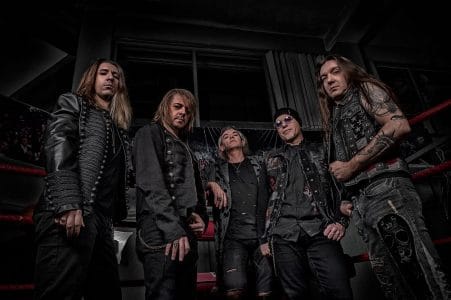 DangerAngel‘s bio on their Facebook page states in part:

“Danger Angel is a hard rock band from Athens, Greece. The band was formed in 2006 by Ethan Snow (guitars) and Spiros Foussekis (guitars), both members of several small, local bands and private projects since the early nineties. Mike Kasidakis is referenced as the original singer and was replaced by Jimmy Cage in 2008 (left 2010), while Tony V. (drums) and Rudy Rallis (bass) joined up in 2008 too. AHAS took over the keyboards spot a while earlier in 2007, while vocalist M.T. (vocals) joined the band in 2010, replacing Jimmy Cage. Spyros Foussekis left during the summer of 2010 and the band decided to continue as a 5-piece.

Danger Angel agreed on a worldwide deal with American label Perris Records in August, 2009 and released their debut album in January 2010. Their second album featuring M.T. in the vocal seat, with the double entendre title “Revolutia” was released in 2013, again via Perris records and was a critics’ and fan favorite all round the world. It was followed by a successful European Tour. M.T. and Danger Angel parted ways early in 2014 but the band lost no time looking around as they, almost immediately, filled the spot with BJ whom they met (and appreciated) during the 2013 European tour as a member of the JSS band. They announced BJ in August 2014 while they had already started recordings for their third album.”