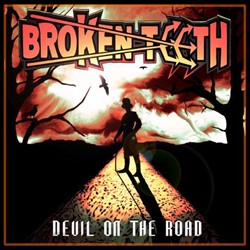 Singer Jason McMaster, best known for his work with Dangerous Toys, has released a new single with his band Broken Teeth. The song, entitled “Devil On The Road”, is now available for purchase as a digital download at CDBaby.com and Amazon.com with a portion of the proceeds going to deceased bassist Travis Weiss’ family.

Travis Weiss, founding member of Austin band Duke UKE — who recorded a new album last year with producer Paul Soroski (Podunk) that is expected to be released on RockArmy Records sometime in 2013 — served as touring bassist for Broken Teeth over the past couple of years, and performed on the new single. Tragically, Weiss unexpectedly passed away in September 2012, forcing both bands into temporary hiatus.

The release of “Devil On The Road” is both a tribute to Weiss, since it represents the final recording he made before his death, and a call to arms for Broken Teeth to continue carrying the flag for classic rock ‘n’ roll in Austin.

“Devil On The Road” is “the only song we have a recording of with Travis on bass, making it special to the band and to his family and fans,” says McMaster. “And his loss was so sudden… we had just gotten off the road, and all of us — the band, his friends, his family — are still in shock.”