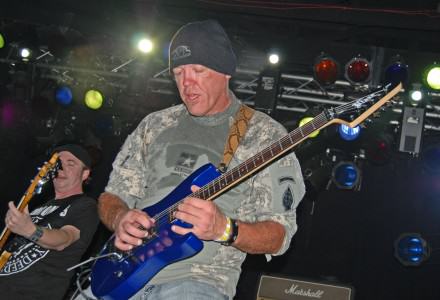 Dalhover was asked the following question: “True or false: You were recruited by Poison to replace CC DeVille.”

Dalhover replied: “I have been asked to replace/fill in for a few different bands.

I did receive a call from someone asking if I wanted to audition.”

Sleaze Roxx then contacted Dalhover to get more details in that regard to which the guitarist advised:

“I have never been interested in being in a band where I had no say in the music or being a hired gun so I have always politely turned down any offers or auditions that I have received.”

Wikipedia states the following about DeVille‘s departure from Poison in the early ’90s: “Despite Poison‘s success, DeVille‘s cocaine addiction had begun to cause strife in the band. Conflict between Michaels and DeVille culminated in a fistfight backstage at the 1991 MTV Video Music Awards, provoked by DeVille‘s inept live performance. DeVille was fired and replaced by Pennsylvanian guitarist Richie Kotzen.”

In terms of his musical influences, Dalhover stated to the Facebook group “Love 80s Hairbands and Southern Rock Bands !! They Rock!!“:

You can gain access to the “live” question and answer session with Dalhover by requesting to join the closed Facebook group “Love 80s Hairbands and Southern Rock Bands !! They Rock!!“.