History was made on Day Two of the inaugural Rocklanta that was held at Center Stage in Atlanta, Georgia, USA on March 30, 2019 when Dangerous Toys performed a new song for the first time in 25 years. The new track is called “Hold Your Horses” and will presumably be on the group’s upcoming new studio album.

Sleaze Roxx stated as follows in its review of Dangerous Toys‘ performance at Rocklanta: 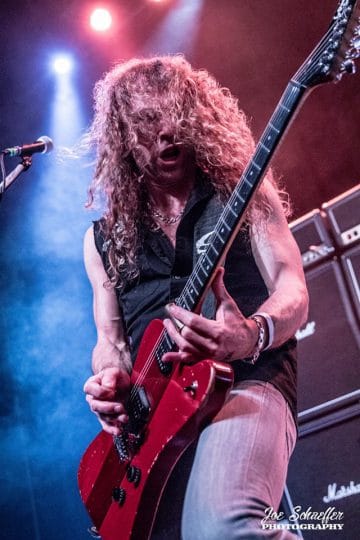 I was very excited to see Dangerous Toys as I have been a fan of theirs ever since the release of their debut album. The band seemingly only play in the state of Texas so it was a real treat to be able to finally see them play live. I have interviewed three of the five members (Jason McMaster, Scott Dalhover and Paul Lidel twice ) over the last few years so you just know that I really like this band! I was curious to see how they would be live as I had never really looked at much live video footage of the band and didn’t know what to expect from frontman Jason McMaster. The Broken Teeth, Ignitor and Dangerous Toys frontman turned out to be a bit of a comic with some at times jokes that bordered a little bit on the crass side. The best way to describe Dangerous Toys in a live setting is like if you had been hit by a Mack truck. The band started off fast and heavy, and simply never let up. It felt like I had been run over by a Mack truck at the end of their set.

McMaster was quite funny with his simple and sometimes crude jokes. The singer made some passing but subtle references to KISS on at least two occasions with the expressions that he was using. McMasterthanked the crowd repeatedly. He noted at one point how much the band members appreciated that they were able to play songs from 30 years ago time after time. McMaster joked about what the song “Sport’n A Woody” was about and how he did not want to say which body part that the song was referring to. He advised the crowd that the last song of the night (“Scared”) was dedicated to Alice Cooper and that anybody that was not going to see the shock rocker live was just dumb. It was very cool to see McMaster giving tribute to his heroes that way. At one point, McMaster changed jackets from a really nice white one with no sleeves to a sleeveless jean jacket with a Dangerous Toys patch on it. Bassist Mike Watson then jokingly asked McMaster for how long that he had that jacket. As many of you may know, the Dangerous Toys line-up is still the same bunch of original guys except with the one new member being Paul Lidel who joined 25 years ago! In any case, it as nice to see Watson banter along with McMaster.

Dangerous Toys delivered a no frills, take no prisoners, type set sprinkled with humour from McMaster. The singer even advised that the group had a sort of ballad but surprisingly, it was the guys who knew the lyrics better before the group launched into “Queen Of The Nile.” I had read in the past that McMaster‘s voice wasn’t great live but I thought his voice sounded quite good. The background vocals sounded really good, which is not surprising considering guitarist Paul Lidel is a fine lead vocalist himself and currently fronting 99 Crimes who happen to be releasing their debut full-length album today (you can order it via Perris Records— trust me, it’s an awesome album). Before the third last song, McMaster advised that Dangerous Toys had a “special surprise for you tonight” (before joking that he was going to turn the mike over to Ace Frehley — there’s one of the KISS references) as they were going to play their first new song to an audience in over 25 years! Dangerous Toys are currently working on a new studio album and if all the tracks are going to be of the caliber of “Hold Your Horses”, we are in for a real treat.