Dangerous Toys have updated their tour dates section of their website and will be playing selected shows throughout the United States including: 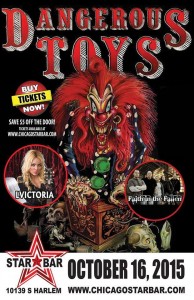 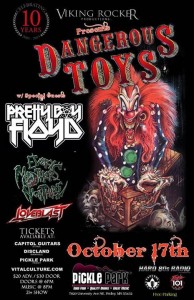 The sleaze rockers originally formed in Austin, Texas, as Onyx, a female fronted sleaze/glam outfit. When conflicts arose with their female singer, Scott Dalhover (guitar), Mike Watson (bass) and Mark Geary (drums) recruited Watchtower frontman Jason McMaster and quickly changed the name to Dangerous Toys. Guitarist Danny Aaron joined the band shortly after the recording of the self-titled 1989 debut album. Dangerous Toys toned down their early outrageous image, and unleashed a debut album filled with catchy, blues infused metal laced with sexual lyrics. The debut album would go gold, but that would be as big as they got.

Dangerous Toys released their sophomore album, Hellacious Acres, in 1991. For the band’s third album, Pissed, which was released in 1994, the group was on an independent label, and had a 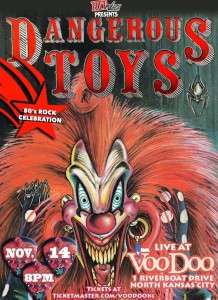 new guitarist in Paul Lidel of Dirty Looks. For the fourth and final studio release released in 1995 and humorously titled, The R*Tist 4*Merly Known As Dangerous Toys, Watson had left and McMaster took on the bass duties. Michael Hannon (ex-Salty Dog) had filled in on bass shortly in 1994. The band’s last studio album would be a huge disappointment as the group tried to update their sound and alienated part of their fan base in the process.

In 2005, Dangerous Toys reunited to celebrate their 18th anniversary. A live album entitled Vitamins And Crash Helmets Tour: Greatest Hits Live followed in 1999 and a greatest hits album titled The Ultimate Dangerous Toys was released in 2004. The band continues to play a handful of shows every year.