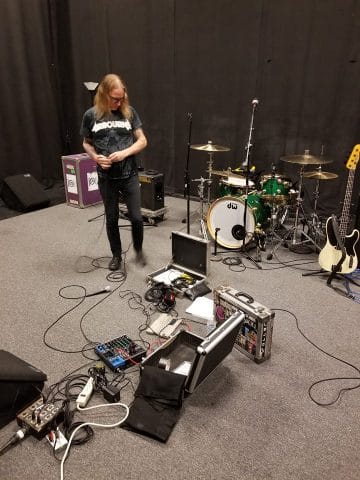 After their late ’80s / early ’90s counterparts such as Tora Tora, Babylon A.D., Jetboy, Roxy Blue and Junkyard have either already released a new studio album or are on the verge to after sometimes decades since releasing one, it is now time for Dangerous Toys to join the party.

The following message was posted on Dangerous Toys guitarist Scott Dalhover‘s Facebook page yesterday (with the photo to the right):

“Jason likes to keep his area pristine while we demo tracks for the new DT album..”

“Though not a full-time ongoing band, Dangerous Toys still regroup and perform at least one live show every year. The band is still active as of 2017. Despite the fact that they have not released an album since 1995’s The R*tist 4*merly Known as Dangerous Toys, frontman Jason McMaster has stated in interviews that there are no plans to release new material under the Dangerous Toys name, although he stated that they have “learned to never say never.” In 2017, it was announced that Dangerous Toys had signed a deal with EMP Label Group, the label of Megadeth bassist David Ellefson to reissue remastered versions of several of the band’s catalog releases including Pissed, The R*tist 4*merly Known as Dangerous Toys, and XX: Live. Pissed was re-released on September 8, 2017 on Vinyl LP, Picture Disc, and CD.”