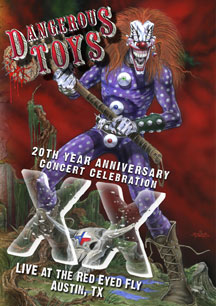 Dangerous Toys reunite in their home town of Austin, Texas for their 20th Anniversary Concert Celebration. ‘XX’ includes a bonus CD, downloadable tracks, and more and will be released through MVD Visual on January 26th!

This DVD/CD package features an awesome performance by Dangerous Toys reuniting for their 20th Anniversary Concert Celebration in their home town of Austin, TX – filmed and recorded at the Red Eyed Fly on May 7, 2005. Here, the band perfectly recaptures their signature brand of hard rock with often humorous lyrics. Founded in 1987, Dangerous Toys put out four full-length albums and one live album before unofficially disbanding at the turn of the millennium. Their major label debut, the Gold-certified Dangerous Toys featured the singles “Teas N’ Pleas N’ ” and “Scared” and both songs appear on this live recording.