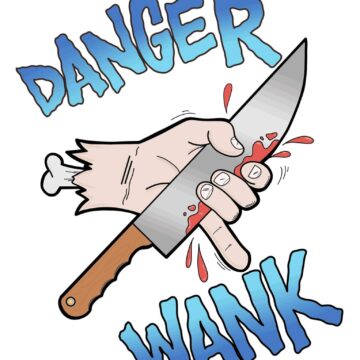 Speaking exclusively to Sleaze Roxx, Guy indicated the following about how Dangerwank first formed: “Dangerwank formed in Queenstown, New Zealand in December 2016. The owner/organiser of a local festival ‘King Beats’ asked the original four members if they’d be interested in a sub-headline slot at the festival but they didn’t have a drummer. The guitar player Alex was seeing my flatmate at the time and asked if I’d be interested in performing the festival. On hearing the material, I initially declined… before hearing the band was going to be called Dangerwank, at which point ” said ‘I’m in!’ And the rest is history.

Dangerwank are based in Queenstown, New Zealand where there are loads of professional covers bands but very few musicians making original music. Dangerwank decided to break the mould, and write and record all their material at my home studio and push to get away from the same old covers.”

Sleaze Roxx hasn’t covered many bands emanating from New Zealand. In terms if what the rock’n all scene is like in New Zealand, Guy indicated: “The rock ‘n roll scene in New Zealand is very underground. It’s hard to push your name out there and it’s a very ‘do it yourself’ mentality. We’ve had the luck to support some fantastic local and international bands such as Skinny Hobo’s, Kara Gordon and The Chats. We have a sublime local following. We’re very fortunate to pack out every gig we play in the Central Otago area. We had a national tour booked for January 2022 but it has been postponed due to the pandemic. The plan for the rest of the year are to release our two upcoming singles — the working titles are “Hard And Fast” and “Dirty Habit” — and reorganize a tour for next summer as well as forge ahead writing new material.”

You can check out Dangerwank‘s age restricted video for “Keep ‘Em On” via YouTube.