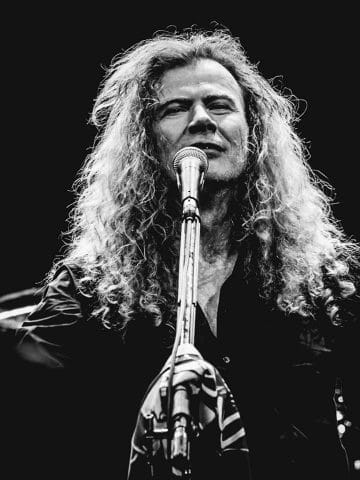 Megadeth frontman Dave Mustaine was recently interviewed by Jimmy Kay for Canada’s The Metal Voice and was asked about collaborating with Annihilator founder Jeff Waters and/or Stryper frontman Michael Sweet.

Mustaine advised (as transcribed by The Metal Voice with slight edits): “Jeff Waters is an amazing talent and has had a really unfair run because of the same thing I suffered from lineup changes and and it’s a bummer. You start off with one vision and then that vision changes over time from different members in the band and it’s usually because of one of the four P’s — power, property, prestige or pussy. For us, every time you’ve ever had a break up, it’s been over drugs money or women. So we — yeah — would be great to do something with those guys. I don’t know how people would actually respond to me doing something [with] Michael Sweet because of the Stryper but I really care a lot about Mike. He’s been to my house for dinner several times.”

In a recent interview with Sleaze Roxx, Sweet was asked about a collaboration with Mustaine and stated: “We’ve talked about that too. Dave [Mustaine] and I have spoken about doing something together. It’s just hard to make it work because everyone is so busy with other things. I think it would be amazing.”

You can hear the interview with Dave Mustaine by The Metal Voice below:

For a quote for The Metal Voice T-shirt please fill out form herehttps://www.themetalvoice.com/themetalvoicestoreFor tickets to the Megacruisehttp://megacru…