Swedish “dirt” rockers Dave’s Neck have released a video for their song “Piece Of Shit” from their debut EP The Girl With The Neck Tattoo, which was released in January 2017. 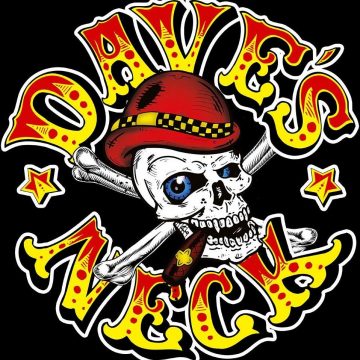 “Dave’s Neck sort of happened by accident. In a couple of months in early 2016 singer, bass player and song writer Stiiiv happened to write a dozen dirty rock tunes he thought was good enough to start a band with. He asked his old buddies Kapten (drums) and Henke (guitar) if they were up to playing some knock-out-dirt-rock, and after a first rehearsal they all felt they had something going. Then it all went fast. In October they had landed a record deal with indie label Vegna Music and in November a 5 track EP was recorded.

Johan “Joe” Vegna, who produced the upcoming EP, sniffed out the band via Soundcloud and got hooked by the simple, dirty but melodic songs. Punk attitude with a raw rock tone. “Dirt rock” as the band themselves likes to call it.

“To me music is a feeling. Its´s in my head all the time. Sometimes I wish it would just shut the fuck up. I kind of wonder what quiet sounds like… I don’t put that much time writing this music. It´s in my head and I just take it out. Going with the first thing that comes to mind. And often the songs are close to finished with the first draft. The lyrics often end up being about things that pisses me off. Like Donald Trump or guys that don’t respect women. Wich maybe is kind of the same… But sometimes it can also be nonsense about a coffee break. I basically just write stuff.” – Stiiiv, Dave’s Neck“

Dirt Rock. Like a slap in the face.Join us on www.facebook.com/davesneck666