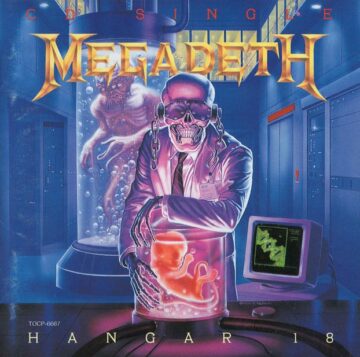 “During a December 5-6 Headbangers Con live virtual panel, David Ellefson explained why Megadeth has opened all live performances in recent years with “Hangar 18”. David said: “2013, we were on a Gigantour with Black Label Society & Hellyeah, and Vinnie Paul, who’s been a lifelong Megadeth fan and a good friend to us, he comes on the bus one day and he goes, ‘Man, y’all’s stage show is amazing, y’all’s light show is incredible. Man, y’all gotta be opening with ‘Hangar 18′.’ We went, ‘Really?’ Me and Dave kind of looked at each other, and Vinnie goes, ‘Yeah, man. I’m telling you, man. That’s the one, ‘Hangar 18′, right there.’

So, that night, we went on stage and opened with ‘Hangar 18’, and it was, like, ‘Wow!’ It really had an excitement about it. So, since then, even to this day, we open with ‘Hangar 18’, and now kind of almost in honor and memory of Vinnie. So we come out rocking, and it’s a great song. It’s nice, because the front-of-house soundman can sort of get our mix together, ’cause there’s no vocals, so it kind of gives him a minute to mix the band. Of course, we do soundcheck, and stuff is digitally stored on the console these days anyway, but still, it kind of gives him a couple of minutes to get the mix of the band together before Dave starts singing the verse.””