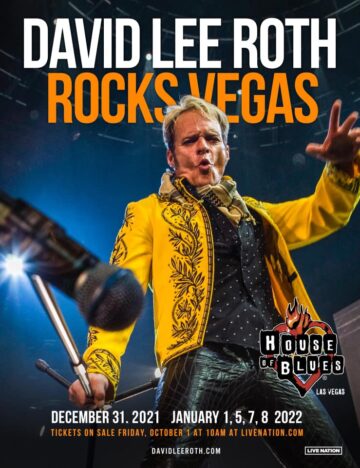 Full dates are as follows:

This is the third Las Vegas residency for Roth. His second stint in 2020, also at the House of Blues, was cut short due to the Covid-19 pandemic. The singer had also set up shop in Vegas back in 1995.

It’s been a newsworthy couple of months for the singer. August saw controversy between Roth and KISS‘ Gene Simmons over remarks Simmons made to RollingStone:

“It bears noting that during Dave’s heyday, nobody did what he did,” Simmons said, “He was the ultimate frontman. Not [Robert] Plant, not Rod Stewart, nobody. He took being a frontman way beyond anything. And then, I don’t know what happened to him… something. And you get modern-day Dave. I prefer to remember Elvis Presley in his prime. Sneering lips, back in Memphis, you know, doing all that. I don’t want to think of bloated naked Elvis on the bathroom floor.”

David Lee Roth‘s response was an image of a baby with its middle finger up and the caption “Roth to Simmons.”

In September, Roth walked the red carpet at the MTV Video Music Awards where he paid tribute to legendary guitarist and bandmate, Eddie Van Halen (per US Weekly):

“My guitarist passed away. He’s either in heaven raisin’ hell. Or he’s in hell, consequently in heaven,” said Roth. “Read into that as you wish. And he would have me say it just like that. And I carry on that spirit deliberately.”