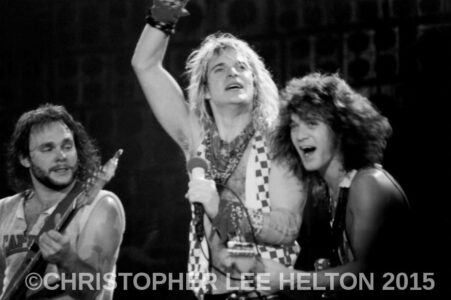 Former Van Halen frontman David Lee Roth is not opening for KISS during the latter’s next leg of their End of The Road World Tour. KISS have enlisted painter David Garibaldi to open their concerts once again. Garibaldi had previously been the opening act for the first few legs of KISS‘ End of The Road World Tour in 2019. Roth had opened a number of shows for KISS during February and early March 2020 before the Covid pandemic shut the music and concert industry down for about one year.

In a recent interview with RollingStone, KISS bassist Gene Simmons was asked about Roth being the opening act for KISS‘ upcoming shows to which he replied: “Not. But it bears noting that during Dave’s heyday, nobody did what he did. He was the ultimate frontman. Not Plant, not Rod Stewart, nobody. He took being a frontman way beyond anything. And then, I don’t know what happened to him… something. And you get modern-day Dave. I prefer to remember Elvis Presley in his prime. Sneering lips, back in Memphis, you know, doing all that. I don’t want to think of bloated naked Elvis on the bathroom floor.”

This apparently did not sit well with Roth who tweeted a photo earlier today of a child giving the middle finger and sticking his tongue with the following words “Roth to Simmons” and posted the photo 18 times on his Instagram account.

After Roth‘s tweet, Simmons‘ long-time KISS bandmate Paul Stanley took the high road by tweeting the following: “Speaking of @DavidLeeRoth… I remember seeing him in the 70’s with Van Halen at MSG and thinking to myself “There’s a new sheriff in town” Just amazing what he had evolved into in a few short years. On stage he’s still Diamond Dave!” 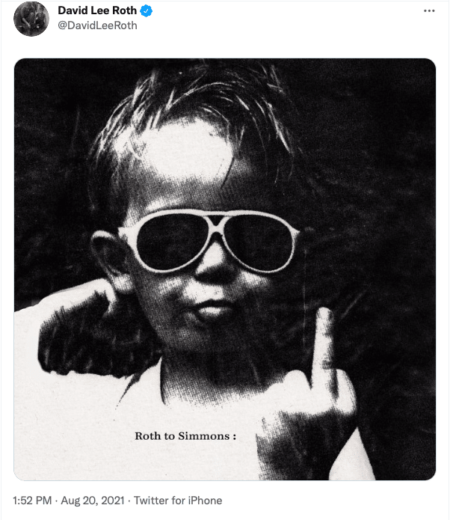