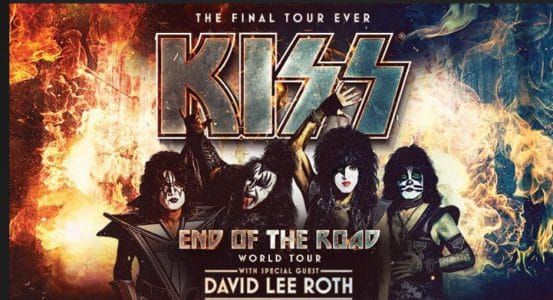 After having painter David Garibaldi open for them during the first legs of their End of The Road World Tour, KISS appear to now have a more “rock ‘n roll” type opening act in Van Halen‘s frontman David Lee Roth. The latter will reportedly be the special guest on KISS‘ upcoming US tour dates, which start up again at the SNHU Arena in Manchester, New Hampshire, USA on February 1, 2020.

The inclusion of Roth as the special guest is a significant upgrade from Garibaldi as Sleaze Roxx provided its thoughts on Garibaldi opening for KISS at the BB&T Center in Sunrise, Florida, USA on August 6, 2019:

“In terms of Garibaldi himself, I was not looking forward to seeing him but curious to take in his appearance (if that makes sense). I was disappointed with KISS not having taken a younger band with them on this tour. After all, Paul Stanley and Gene Simmons had spoken in an interview with SiriusXM‘s Ozzy’s Boneyard late last year about some of the great opening acts that they had had over the years which included AC/DC, Rush, Bob Seger, Judas Priest and John Cougar Mellencamp, yet here they were bringing a performance painter to open their last tour! I get that Paul Stanley loves to paint and is probably thrilled to have Garibaldi on board to talk shop during KISS‘ North American tour but it’s really disappointing for a rock fan like me who isn’t into painting.”