David Lee Roth to reunite with solo band in the future

David Lee Roth will be reuniting with his Eat ‘Em And Smile solo band line-up of Steve Vai (guitar), Billy Sheehan (bass) and Greg Bissonette (drums) in the future but no further details have been provided. 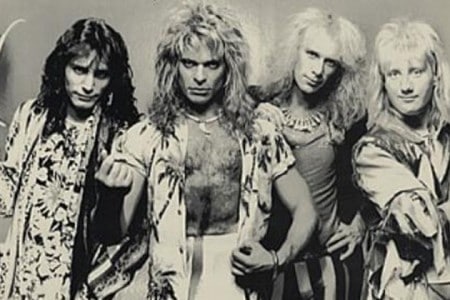 The trio along with keyboardist Brett Tuggle was supposed to play a gig with Steel Panther frontman Michael Starr handling the lead vocals to celebrate the 30th anniversary of the group’s first album Eat ‘Em And Smile live at the Ultimate Jam Night featured at the Lucky Strike Live In Hollywood, California, USA on November 25, 2015. Roth was going to make a surprise appearance to complete the reunion on that night but the venue was closed down at the last minute by a fire marshall due to overcrowding.

“Billy Sheehan recently confirmed with the David Lee Roth News Desk that there will in fact be a reunion of the ‘Eat Em And Smile‘ band. There is no word yet if this will be just a show or world tour. Stay tuned for updates!…”

Eat ‘Em And Smile was Roth‘s first full length solo album and was released in the summer of 1986. It achieved double platinum success in the United States of America and turned out to be Roth‘s biggest selling solo album.

Dave is looking kinda faggy but the first min. is funny as Hell