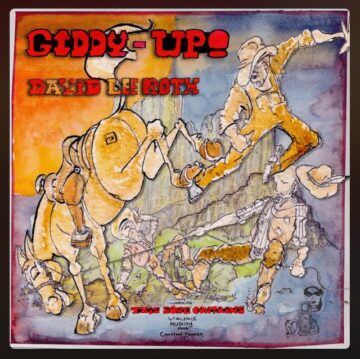 Van Halen frontman David Lee Roth has unveiled a new single titled “Giddy-Up.” The artwork for the single cover was reportedly done by Roth himself.

Roth‘s last studio album Diamond Dave dates back to 2003 and which consisted of mainly covers of blues and hard rock songs. Back in 1998, Roth released the studio album DLR Band, which was largely co-written with guitarist John 5 (Rob Zombie, L.A. Rats, ex-Marilyn Manson).

Roth has allegedly written another album with John 5 that has not yet seen the light of day.

In an interview with Meltdown of the Detroit radio station WRIF back in or about September 2019, Roth was asked whether the album would now see the light of day to which he indicated (as noted by Blabblemouth): “It will. There’s been a revision of things, and I can start making real plans and start marching into the future. And, of course, you’ll start hearing that material. This is material that we wrote variously for me solo and for Van Halen, and it’s quite a bank of stuff.”