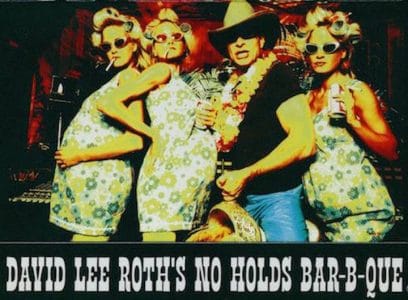 reported on Diamond Dave‘s video back in 2002 and stated:

“David Lee Roth has begun sending out his latest project, David Lee Roth‘s No Holds Bar-B-Que, to music-industry insiders. It’s an hour-plus-long videotape that Roth previously described this way: “The idea was to invent a new kind of television. It’s not really a show, it’s not really a video, it’s Diamond David Lee Roth. Watch this tape once all the way thru–and you will never look at other video artists again through the same eyes. Ever.”

The package features the videos the erstwhile Van Halen frontman has already posted on his davidleeroth.com website, including his cover versions of the Lords Of Acid‘s “The Crablouse,” which is credited on the package as “Flex,” and the Chemical Brothers‘ “Dig Your Own Hole,” which he calls “‘How About A Little Fire’ Scarecrow?”

In addition to those songs, David Lee Roth‘s No Holds Bar-B-Que also has a bunch of cover versions, including “Tomorrow Never Knows” by “Them Beatles,” as Roth refers to them; “Baker Street” by Gerry Rafferty; “Living In America” by James Brown; “Fool For Your Stockings” by ZZ Top; “Shine A Little Love” (here referred to as “Shine A Little More”) by the Electric Light Orchestra; and songs by jazz artists Ottmar Liebert & Luna Negra (“Adrift In Tangier”); and the late Django Reinhardt (“Lime House Blues” and “Exactly Like You”). Of course, he also reaches back into his Van Halen past for a full-band acoustic version of “Mean Streets” from Fair Warning, and the tape also includes a bit of Roth doing “Ice Cream Man” from Van Halen‘s first album.

Besides his martial arts exercises, the tape features Roth cavorting with: a pint-sized partner a la Kid Rock and the late Joe C.; heavily armed men; and women in various stages of dress, in classic “Diamond Dave” fashion.

In an earlier statement, Roth called the videotape “one hour of edited, retina-roasting film, video, beats, and often imitated but never duplicated Roth-style hilarity,” on which he claims to have spent about $1 million of his own money.”