The one and only David Lee Roth was apparently going to make a surprise appearance but the venue was closed down at the last minute by a fire marshall due to overcrowding. Roth can be seen exiting the Lucky Strike Live, and while signing an autograph, commented (video courtesy of the California Rock News): “It looks like we were too popular. There were too many folks so we are going to try to find a place that has a place a little bigger. What do you think? Should we go to the Hollywood Palladium maybe?” 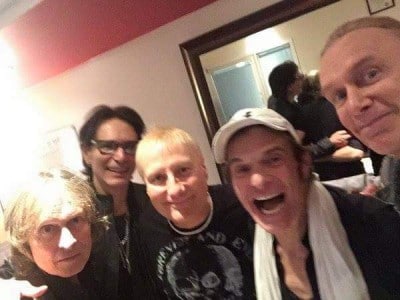 “Well well well. The fire department shut down the whole show before we got on stage. And did we ever have a surprise for you! Such is life.”

“Place was so crowded and the line continued down to Hollywood Blvd all night. Just too many people.”

“Heading home. I wish we could have played tonight. Fire Marshall shut the club down. Too many people.”

“From last night. The original Eat ‘Em and Smile Band! Sad we got shut down, it was GREAT to all be together again.”

Clearly, there seems to be a lot of interest in Roth reuniting with Vai, Sheehan, Bissonette and Tuggle to play songs from Roth‘s debut full length solo album Eat ‘Em And Smile.