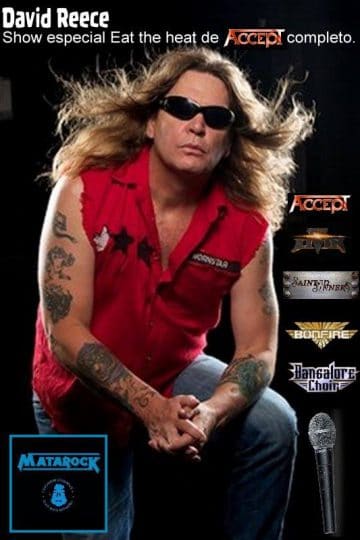 It was noted that there is a demand to hear the songs from Accept‘s album Eat The Heat where Reece handled the lead vocals. Reece was asked whether he’d like to play the songs as a solo artist to which he replied: “Yeah, I’m actually doing a solo tour next March in Barcelona with Spanish band. We are booking shows and we’ll be playing “Eat The Heat” album in its entirety because fans want me to do that and it’s time because with Sainted Sinners we play “Generation Clash” and “Hellhammer” but everybody asked for “X-T-C”, “D-Train” etc. I can still sing the songs, so yeah – the first show is March, 10, in Barcelona.”

When Good Times Rock pointed out that it would be great to have that show in Russia, Reece stated: “That would be cool, this door is open. A lot of people told me “You should do this” and finally I said “Ok”. So we are working on more shows in Europe so if this happens I’d love to do it. You know, maybe Udo will be in town and join me on stage – that will be great. I can do this in Russia with Russian band or we can come up with Andy Susemihl and Stefan Schwarzmann.”

You can read the rest of the interview with Reece at Good Times Rock.