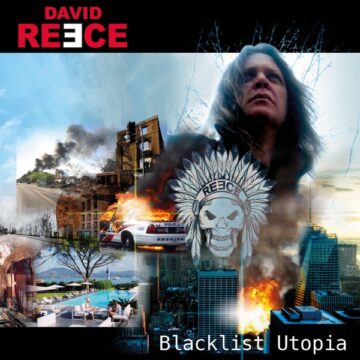 “There is hardly a voice in metal that has enriched so many different albums in recent years as that of the US-born David Reece. And that, although his legendary Accept times were a while ago. However, he is in top form on his solo albums. After the great Cacophony of Souls album, the master is up to date today with “Blacklist Utopia” with a slightly different line-up!

In addition to the songwriter Malte Frederik Burkert on bass and the experienced Andy Susemihl (guitars), Francesco Jovino (known from Primal Fear, U.D.O. and Voodoo Circle) has also joined on the drums. The trade press certifies him – Eat The Heat nostalgic people may forgive it – the best line-up with which he has started so far.

Blacklist Utopia is a thought-provoking album. It combines the views of his American roots with the observations of a musician living in Europe. The album is not political, but it works on his thoughts about the past year. A new video, “American Dream”, was released the evening before.”