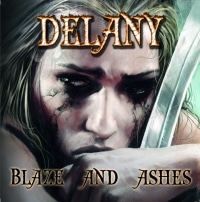 MUSIC BUY MAIL is proud to announce the release of DELANY “Blaze And Ashes” in November 13, 2009.

DELANY is a brand new fascinating project with internationally well known musicians such as Lana Lane, David Readman and Davy Vain. The concept album “Blaze & Ashes” is based on Wolfgang Hohlbein’s continuation of his successful fantasy novels “Chronicle of the Immortal”. The adventures take place in London and are wrapped up in an exciting and emotional rock album. The main book actors Andrey, Abu Dun, Inspector Marcus, Frederic, Loki and Meruhe are spectacularly played to the gallery by the singers! Dennis Ward was once again responsible for a brilliant mix and mastering!

Wolfgang Hohlbein, born 1953 in Weimar , belongs to the most successful and important authors in Germany with more than 35 million sold books. He achieved his break through in 1982 with his book for young people called “Marchenmond” for which he received the Phantastik price of the city of Wetzlar . From this point on, he wrote more than 150 novels, children’s and youth’s books as well as screen plays.

The concept of “Blaze & Ashes” was launched by Volker Leson. Based on Hohlbein’s new novel, he created a unique and special musical master plan. Volker Leson has been actively involved in the music business with his heavy metal band WIZARD for 20 years. Over the last year he could gain a high reputation in the international metalcircus with his recent album releases. Besides of Davy Vain, Volker Leson is one of the main songwriters / lyricists. Davy Vain reached international success with his band VAIN in the 1980’s and ever since then he is also a well sought after and booked songwriter / producer for artists such as JOURNEY, VAN HALEN, CHRISTINA AGUILERA, LINDA PERRY (4 NON BLONDES), DEATH ANGEL, etc. Davy knows, like no one other, how to create great song structures with catchy melodies so that each song becomes his very own special vibe and emotion! Beside Volker and Davy, a young and talented guy of the “new generation of rock” is the third songwriter: Torsti Spoof of Finnish hardrock high-flyer LEVERAGE.

As to Lana Lane, the main female actor, it is not even necessary to announce her in a fancy manner. Lana is an international star, when we are talking about progressive & symphonic metal and classic rock. She always works with high profile musicians on her albums such as BLUE MURDER and THE FIRM bass player Tony Franklin, keyboarder Eric Norlander, Mark Boals, Gary Hughes, just to mention a few. Especially in Asia , Lana reached single figure chart placements. Along with Lana Lane in the first row is also David Readman of PINK CREAM 69, ADAGIO and VOODOO CIRCLE . David is a fascinating charismatic singer who convinces not only in the studio but electrifies his live audience with his voice and charisma. That’s why David can often be seen live on stage rocking with his band (Alex Beyrodt und SIMPLE MINDS drummer Mel Gaynor).

The ex-“Wunderkind” Jamie Scott (Vain), who already joined the legendary metal band VICIOUS RUMORS at the age of 16 played guitar on the album together with Dano Boland from WIZARD. Tommy Rickard is responsible for all drums on the album and no one else as keyboard mastermind Erik Norlander is doing keyboards on “Love Tears”.

Dennis Ward (PINK CREAM 69) is known for brilliant and powerful productions and once again he refined BLAZE AND ASHES with his mix and mastering.

“Blaze & Ashes” is a timeless rock album, thematically and stylistically connected to Wolfgang Hohlbein’s new novel “Chronic of Immortals” … the rumours about the mysterious case of death let both immortals Delany and Abu Dun move to London to search for the Phantom! On an exciting and fascinating hunt both get into traps set by a gang of street kids and find themselves in the police’ dungeon before a huge fire sparks over London …