Big news in the DC4 camp as the Duncan brothers including Armored Saint guitarist Jeff Duncan and ex-Dio and current Bang Tango guitarist Rowan Robertson will be releasing a new studio album titled Atomic Highway via HighVolMusic in September 2018. 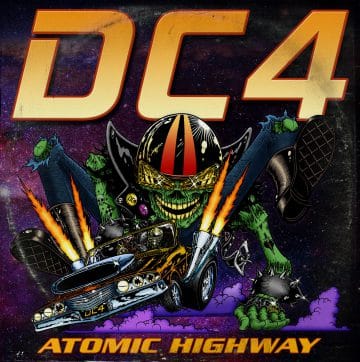 Sleaze Roxx interviewed Robertson back in October 2015 who spoke about how he ended up joining DC4: “I met Jeff Duncan on some out of town gigs though a mutual friend, and Jeff said, “Hey, wanna come play with my band?” So I got together with them in LA, and it was just the sort of group of guys and music that I wanted to get involved with at the time, as I was looking to get back into blues based rock again. I really missed it! Off subject, I think the last era of music to really include the blues roots was the Soundgarden/Alice In Chains era stuff. Today, popular music has no blues in it to speak of. There are some newer bands carrying the torch like Orange Goblin, Rival Sons and Blackberry Smoke. That’s really where my heart is as a musician. The blues influence really carries the magic for me. Of course, I love classical music too and it expresses a whole different range of feelings that blues cannot express, but for me, if it’s rocking, the blues has to be there! It’s that mixed with the beat that makes people go crazy — in a good way of course!…

Since I’ve been playing with them, Jeff and I continue to geek out like crazy on guitar stuff, as guitarists do. He is a very strong player as his work with Armored Saint and DC4 shows. We’re always showing each other neat stuff, from Van Halen to some new things I’ve been working at. I will always be a student of music so go through phases of learning new things and my time with DC4 contained a lot of that sort of thing. We always come back to the same place though, killer riff based music because it’s what grabbed us early on in life.”